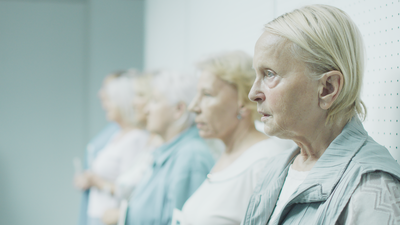 Woman on the Roof is a Polish movie about an older woman whose day starts off normal- she hangs up her laundry on the roof, goes to the pet store to buy fish food, and then attempts to rob a bank with a kitchen knife as the weapon of choice.

This out-of-character attempt alters her and her family's life as the police come to her apartment the next day. I really don't want to say too much about this movie. I think it's better to see it without knowing a whole lot. At first, I wasn't sure if I would like it, I was worried it would be too slow and boring, but this wasn't the case for me.

This is a movie, almost a character study about someone with depression who has an apathetic, rough-around-the-edges husband, and a son who doesn't show much compassion either. It's a pretty depressing film! I really felt sad for the main character. Some might find it too depressing, but I liked it.  Dorota Pomykala who played the main character, Mira, really did a good job of showing depression and isolation. My one critique is that I watched this at home and a lot of the subtitles are white on white. I had to move close to my TV to read them. If you see this on a big screen it might not be as much of an issue, but watching it at home it was hard to read.