GREEN GHOST AND THE MASTERS OF THE STONE (2022) 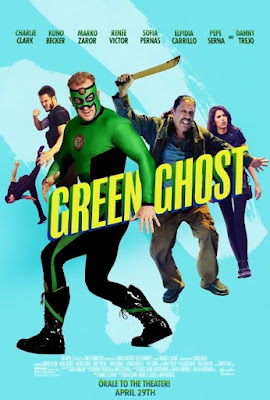 This superhero throwback with the well loved plot of an unlikely hero tasked with stopping the end of the world GREEN GHOST AND THE MASTERS OF THE STONE is a great deal of fun.
This is a low budget film with more heart and soul than most of the recent Marvel and DC super blockbusters. Caring more about characters than the block busters the film sucks us in and carries us a long on this improbable romp. And because the film is all about the characters we don’t mind the low budget. Sure we get some visual effects  but everything isn’t unreal and computer generated. Instead we get real people interacting and fighting with each other and not computer generated versions of each other.
Speaking of which because things are not computer enhanced the action sequences carry more weight. We lean in to things because that’s two people up on the screen battling it out. Why can't more films do it this way?
I had an absolute blast watching this movie. I mean I really did. I wished that I was curled up on the couch watching this with my dad. Actually I wish I had been lucky enough to have seen this when this played in theaters back in April. This film would have been such a blast in a room full of like minded people or in at drive-in.
Yea I know I haven’t been talking in detail about the plot and such, but that’s not that important and its similar to a thousand other, what's important is the joy the film brings to the hopeless movie or comic book addict looking for a rush of nostalgia.  I had a big stupid ass grin on face the whole time. I haven't been this delighted by a film on a pure popcorn level in a very long time and that includes recently seeing mega hit RRR.
Recommended for some glorious low budget action fun
Posted by Steve Kopian at June 28, 2022