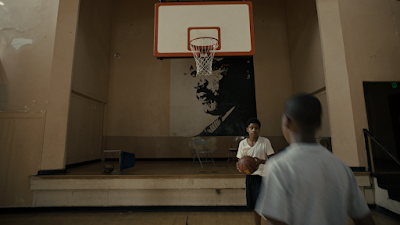 One of the best films to deal with life under covid is also one hell of a film looking at social justice.

GAME CHANGE GAME is a stunner.  The film is the story of the 2020 NBA season which saw it closed down because of covid and explode because of the social justice protests that happened when too many people were killed because of the color of their skin.

I don't know what to say. I put this film on as a kind of filler. The idea was I would try some of the films in the press library  just because they were there. Very quickly I fell into the film because it so beautifully made me want to relive a time not so long ago.

All hail Maxime Quoilin and Spike Jordan who have made a film that throws out all the tropes of not only covid films but also social justice and sports films. They haven't made a film that preaches or tries to "inform" us, instead they simply tell us a series of interrelated stories. Its as if we were sitting in a diner having coffee and they just tell us what happened.  The result is a film that informs us about all sorts of subjects, but more importantly makes us want to get up off our asses and do something.

This is just a great film.  I have no idea why more people have not been talking about it out of Tribeca but they should be.