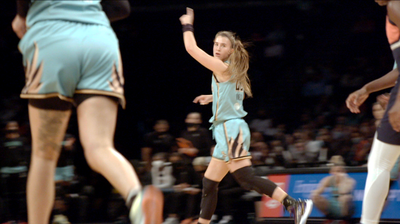 Near great look at the rise of the WNBA and the status of women's sports in America. It reveals the hard fought battle to get the league off the ground and make it go. The film highlights how the women were not and are not being paid their full value. If you want to know how under paid the women are consider that the ladies still have to travel over seas to make a living wage. It also highlights the problem the league originally had problems with any discussions of same sex relationships. We also get the problems of running a franchise through the up and down nature of the Liberty.

I liked this film a great deal. It put a lot of stuff together that I had learned from watching the games and listening to talk radio. For the first time I really understood how it all came together

If there is problem with the film its that it should have been two films. There is enough here that there could have been a WNBA film and a film on the New York Liberty.  I say this because there are a number of bits on each subject that could have been expanded.

Quibble aside this film is recommended.