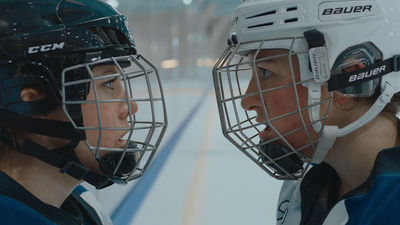 A young woman helping to tend her family's vineyard finds time for herself by playing on an all women hockey team. When a new player arrives she also finds a potential girlfriend.

This is a nice little film. Its a sweet little romance mixed with family drama that works because the performances are such that we want to lean into the characters and hang with them. We understand their point of view and we want to spend time with them. I really liked  the film a great deal.

A quick note to anyone who sees this, if you're given the option to see this in a theater or on line, go on line.  I say this because I started this film at the festival but the white on white subtitles made it extremely to follow (the film is about hockey players so there is a lot of ice, white rink walls and white jerseys). I went home and watched it as part of Tribeca at Home and enjoyed it ten times more.