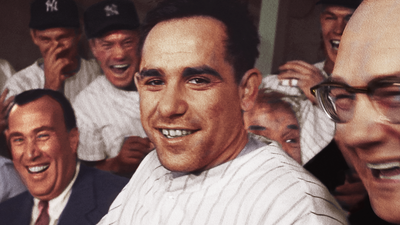 When Major League Baseball had the four greatest living baseball players show up at the  All Star Game, they made a major mistake in forgetting Yogi Berra. While he is best known for his Yogi-isms, most people forget how good a player he really was. How good was he? He has 13 World Series rings, 10 as a player, which is more than the  the four players the shuttled out combined. When Berra's granddaughter saw the "mistake" she took steps to correct it.

Containing a who's who of admirers, both in baseball and out, IT' AIN'T OVER is a moving film that fixes the record regarding Yogi Berra. One of the greatest that ever played, this film makes it clear that he was in many ways was more amazing than Joe DiMaggio and Mickey Mantle. The trouble is he was a lovable guy who said things that sounded goofy (When you see a fork in the road take it).  He let the media create a character for him and he went with it, which endeared him to generations while hiding his real achievements.

Everything seems to be here, from his friendship with Jackie Robinson, to his support of LGBT rights to a long laundry list of amazing things. Berra never stopped doing and doing the right thing.

I really liked this film a great deal. This is a super film that is full of laughs and tears and more nostalgia than you can shake a stick at.

That said the film has one big problem and that is the film relies a bit too much on Berra's granddaughter. While what she tells us is golden, having so much come from her and not other baseball players kind of lessens things. Why is she telling us this and not some of the other people who are interviewed? While I'm a long time Berra fan and understand how good he was, I know people coming in blind may not be convinced.

Slight reservation aside, this film is an absolute must, more so if you love baseball.