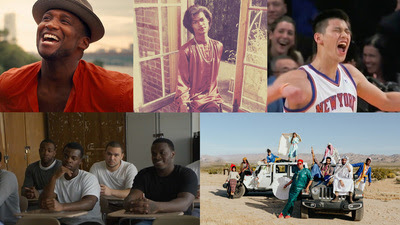 The shorts collection NEW YORK KEEPING IT REAL contained five films. Three,  had JOHN LEGIUIZAMO LIVE AT RIKERS, HOUSE OF LEBEIJA and 38 AT THE GARDEN (this one is coming soon) were reviewed separately and two other:

GONE FORGOTTEN YEAR is a short music video celebrating the fact that covid, is in theory fading and we can be intimate. Its a sweet little song that's gonna put a smile on your face.

ALHAMDU/MUSLIM FUTURISM is a short video of gorgeously dressed people in magnificent landscapes. I have no idea what it means but my god it looks great. 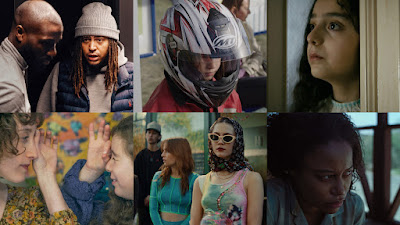 The Shorts Collection OBSTACLE COURSE had seven films in it

ARTICHOKE SEASON is a charming Israeli short about a young girl and her parents  and their loves and troubles. Its sweet.

DAYDREAMERS is a moving film about a single dad who loves riding a motorcycle but is going blind. Its is deeply moving about a child's love for her dad.

VODKA- is a wicked film about a young girl remembering her crazy grandmother with magenta hair and a love of vodka. She was a take no prisoners broad who insisted her granddaughter not let anyone make her feel useless. I was moved to tears because in the person of the grandmother I saw two the greatest women I've ever known, my mom and the late great Sally Willis who was wild and crazy and did things like packed up her under ten kids and went to Woodstock because it sounded cool. TO me this was as fitting a tribute to the women who shaped me as I could ever hope to see.

ANOTHER COUNTRY- cinematic poem about a child born of a bi-racial couple in the deep American South in the bad old days. Its a stunningly beautiful film that will rock your world. Its one of the best films at Tribeca. It left the audience stunned and the collection should of ended here...

Unfortunately the poppy music video BRUTAL followed it and wrecked the mood and made reviewing this film impossible because what is one of the absolute worst transitions I've ever seen in a shorts collection.

CANCELED is magnificently made short in need of expanding and rethinking.  The film is the story of a rap artist who is canceled when social media gets pissed at him. While there is a story here the film suffers because it's not clear what is going on, or what caused the canceling until late in the film, and then the ending is wildly out of left field in the worst sort of way. I love the idea but too much is in the filmmakers head.

The collection also contained the film TOUCHLINE which I reviewed earlier