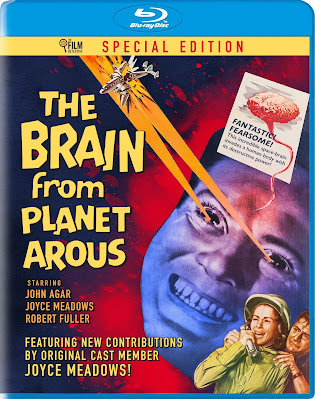 The classic so good it's bad film THE BRAIN FROM PLANET AROUS has gotten a stunning edition from The Film Detective. If you you love the film or even like it then you need to get yourself a copy.

The film is the story of a criminal giant brain from space who takes over a scientist in an attempt to take over the world. He is opposed by some humans as well as another brain hiding in a dog. It's wacky fun.

And if you think this sounds like something that Mystery Science Theater 3000 would have riff, you're close. This film was ribbed by the Mads aka Trace Beaulieu and Frank Conniff of MST3K both in person and on their streaming show. Its a film that has plenty that's wrong, but it also has plenty that's right, which is why I've seen the film multiple times over the years.

Honestly the real reason to get the edition, or any addition of any film from  Film Detective, is the special features. The official list is: " Full-color booklet with original essay by author/historian Tom Weaver; full commentary track by historians Tom Weaver, David Schecter, Larry Blamire and The Brain From Planet Arous star Joyce Meadows; The Man Before the Brain: Director Nathan Juran and The Man Behind the Brain: The World of Nathan Juran, both original Ballyhoo Motion Pictures productions; restored film presented in its original 1.85 theatrically released format and in 1.33:1 full-frame format; and a special, all new, introduction by star Joyce Meadows."  And I want to mention the restoration which is stunning. It's never looked this good.

You all need this.