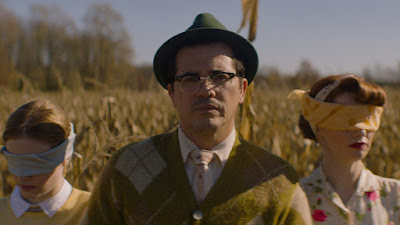 I seriously debated whether to review GREEN VEIL. It was described by a friend of mine as "a hot mess". I can't disagree. At the same time there is something about it....
Run as part of the TRIBECA NOW collection the series is set in the 1950's in Connecticut. John Leguizamo plays a deeply devote Christian government agent trying to deal with the alien invasion that they are trying to keep secret. As part  of it he is kidnapping Native American children and putting them in orphanages before their parents are abducted. His wife and adopted daughter, whom he doesn't know is Jewish, chaffe at his control and need to have a perfect family.
The spine of the film, the story of repression and the alien mystery would make a stunning feature film. The story really has great potential and I would be the first one to line up and watch it if this was redone with a better script. Actually I would gladly see it if it had a script that made a bit more sense and cut out all the horribly misplaced humor.
The problem is the details make zero sense.
Leguizamo's character is a renamed Mexican born  man that was kidnapped as a child from his mother when they were trying to cross into America. The whys or hows makes no sense. It doesn't help his character is hateful and you don't want to be with him. Speaking of which, what in the hell is his wife doing with him? A pilot during the Second World War  there is nothing here to explain why she married her husband. Its so out of place it makes everything beyond them unbelievable.
The whole repression thematic lines are interesting but forced. It takes all of notions of 1950's repression and mashes them together and forces us us to take it all in as if this was the way it was. I mean life here is all repression and happy pills. It's all over done.
Also over done is the humor, which is often  out of place. You can't have the goofy characters and the serious subject since they are too far apart in styles.
I know I shouldn't have said anything but there is enough here that I want a do over.
Posted by Steve Kopian at June 19, 2022