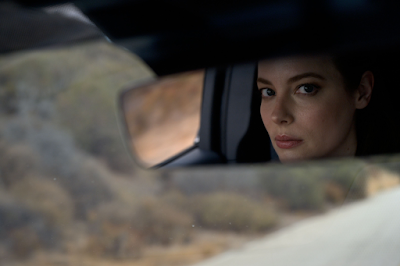 Eight filmmakers come together to create one genre-obliterating film that centers around a woman named Jane.

Jane drops off her daughter at sleepaway camp.

In search of coffee, Jane encounters her doppelganger.

Jane rides an emotional and musical rollercoaster from delight to broken-heartedness, celebrating the friendship between her and a friend named Sybil.

Jane picks up a free-spirited hitchhiker. Their drive is a fantasy sequence in more than one way.

Jane encounters a girl running away from her Quinceanera. Their conversation turns to identity and confessions. It’s a celebration of similarities amongst strangers. As Rose, actress Daniela Hernandez is a star.

The One Who Got Away

Community costar Joel McHale reunites with Gilligan Jacobs when Jane flags down a jogger and old friend sharing an intimate past. Jacobs and McHale have explosive chemistry together. When it comes down to it, McHale completely steals this scene. It is a wow of a turn.

Jane attends a call for a mysterious audition that begs more questions than answers. Breeda Wool gives us a manic performance you’ll struggle to shake.

The only visual throughline is Jacobs and Jane’s all-new Ford Mustang Mach E. The automaker worked with producer Roman Coppola to bring the film to life. The stylistic maneuvering never lets you tune out. As each story differs in length and cinematography, The Seven Faces of Jane is an extraordinary film. Bentonville 2022 audiences are in for one wild ride.