Liz Whittemore's Tribeca Immersive 2022 reviews: ‘Plastisapiens’ & ‘This Is Not A Ceremony’ are visions of despair and pleas for action. 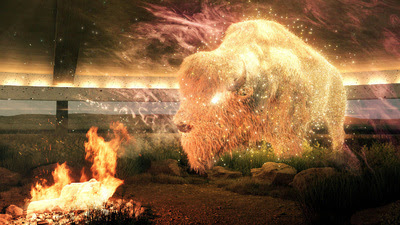 THIS IS NOT A CEREMONY

I was greeted outside the exhibit by director Ahnahktsipiitaa (Colin Van Loon) before I knew I was about to enter his endlessly effective film. As I sat with VR goggles on in a small dark room, I was treated to an experience that would leave me forever changed. I bore witness to tragic stories of racism and mistreatment of Canadian Indigenous people. This structure is like a fever dream with reenactments, an enormous burning buffalo, and two indigenous narrators that guided my eyes in a 360-degree manner. When immersive tech first started to appear at film festivals, I was one of the earlier guinea pigs. Now, outside of the gaming world, immersive films have the ability to place an audience inside a story, touching almost every one of our senses. When This Is Not A Ceremony concluded, Van Loon handed me a Blackfoot tobacco tie, thanking me for being part of this narrative. The passion and format of this film are unmissable. You cannot help but feel the need to do something about the ongoing injustice. This Is Not A Ceremony is a haunting call to action. 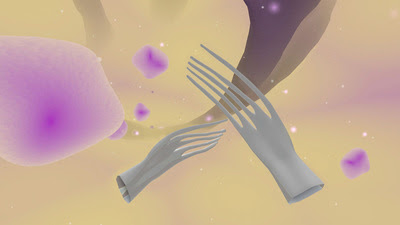 Plastisapiens had an ethereal appearance as I approached the experience. Housed in a draped tent, with dripping and “organic” masses hanging from its ceiling. I was left to a small enclave and comfy stool where I was given my VR goggles and controllers. Plastisapiens had me on the bottom of the ocean floor back in time. The evolution of life and the introduction of plastic toxins into that environment are tracked into a speculative future. Used the controllers and my breath to maneuver forward through time and grasp objects. As the timeline pressed on, I skyrocketed upwards from sea to a new environment. The narration utilizes a modulated voice-over that is absolute perfection, as human merges with inorganic material, changing the very existence of life as we know it. Plastisapiens was mesmerizing. Writer-directors Miri Chekhanovich and Édith Jorisch created something mysterious, educational, and terrifying. I left awestruck.