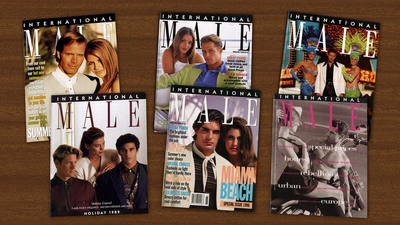 The impact of men’s fashion takes center stage in Tribeca 2022 doc ALL MAN: THE INTERNATIONAL MALE STORY. One innovative catalog gave men the freedom to be themselves. Its global and cultural influence spans generations like no other men’s fashion publication. In building International Male, Gene Burkard’s emphasis wasn’t on sex, even if the catalog featured chiseled men in high fashion. He and his creative team broke the mold of selling menswear while pushing a lifestyle brand. In the same way men ogle Victoria’s Secret, International Male became a household object to covet for innumerable reasons.

Matt Bomer‘s narration adds a brilliant touch of nostalgia in a way that is hard to describe until you experience it for yourself. The film uses archival footage and photography, sit-down interviews, and creative transitional animation. The catalog was bright, smart, sexy, and gave men something to aspire to be. It challenged the idea of masculinity with its European-inspired fashion and copy, written by Gene. He was meticulous in his work ethic, taking customer feedback and recognizing that 75% of their shoppers were women. Watching the images from the catalogs made me want to order (almost) every single article of clothing for my husband. Gene clearly understood the broad appeal. If International Male existed today, I’d be begging them to take my money.

Everything shifted for International Male once the AIDS epidemic touched the employees and the world. Gene sold the catalog, and the new creative directors were more hesitant to hire queer staff, in fact, firing a huge percentage of them. In the 90s, the positive changes came in the form of more models of color. But with the loss of gay buyers and department stores filled with men’s retail, International Male was no longer a cash cow. But it’s easy to see how the catalog catapulted our current influencers in pop culture with the freedom to express themselves on a gender spectrum now celebrated across the globe. So, thank you, International Male. You made a difference while allowing us to drool.