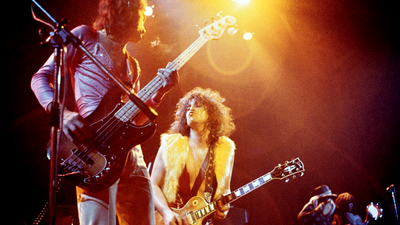 A biography of Marc Bolan mixes with the recording of  tribute album by a vast cast that included U2, Elton John and Nick Cave. This is one of the hidden treasures of this year’s Tribeca Festival. A wonderful celebration of a man and his music the film nicely explains why Bolan resonates still.

I got hooked from the first frame. The film opens with Billy Idol talking about seeing Bolan at a festival where 150,000 people booed him as he walked on stage.  Idol said Bolan told the crowd to fuck off and went into his set which resulted in cheers at the end. This leads into the Edge trying to work out how to play part of the Bang a Gong because the guitar part is not as simple as it seems. From there we get a mixture of new and old performances mixed with great historical footage and great stories.

I was always a kind of fan of Bolan but this film amped it up a notch. I now have a better appreciation of the man and his music especially since everyone talks about why he matters to them.

Ultimately though the film is an absolute blast.  This is a film that is just a great deal of fun

DO yourself a favor and track this film down because it is the sort of film all music docs should like.