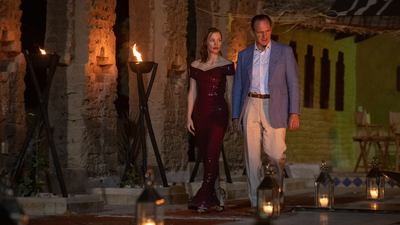 Unhappy couple are traveling to a friend's house deep in the Moroccan desert  for a party when they run over a young man.  Taking the body to the house, they, along with their host, must figure out the best way to handle the situation.

Yet another tale of rich white European running roughshod over the local population is nothing we haven't seen before. This is a grand morality tale where we can pretty much fill in all of the blanks and plot how it's going to go.

The the problem here is entirely the screenplay which is been there and done that. We've seen god knows how many variations on this tale which is kind of just another warning that the rich get away (more or less) with everything because they have all the cash. There is nothing we haven't seen before, and its all made worse by characters that aren't fleshed out but sketched out via series of pick and choose cliches.

The cast headed by Ralph Fiennes (as the drunken driver), Jessica Chastain (as his annoyed wife), and Matt Smith (as the host) are all fine in roles that allow them to dress up in fancy clothes. The problem is none of them feel authentic and they are clearly all playing dress up.  They breath life in to shop worn materials they are given to work with, but you can't look too closely because you can see the fingerprints of generations of other actors playing similar roles.

While is watchable, FORGIVEN is less a compelling work than a film you put on while you are doing other things while waiting for your other programs to come on.