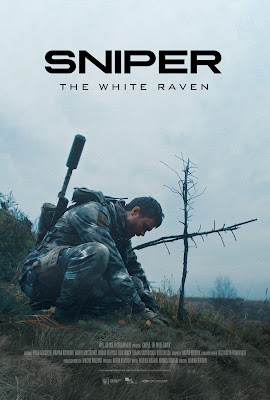 This is a timely film about the evils of Russian military intervention in Ukraine from not that long ago. It’s a stark reminder that Russia is not to be trusted, and that what happened earlier in 2022 is nothing new, and that we shouldn’t have been surprised since they did it before. The film is also a reminder that the Ukrainian people are not going to sit idly by and not fight back when provoked.

Sniper: White Raven is the true story of a college professor who wanted nothing more than to live peacefully with his wife. However in 2014 when the Russians last made an incursion into Ukraine they burned his home and killed his wife. Our pacifist hero then took up arms to get payback on the people who destroyed his life

To be perfectly honest I am really mixed on this film. While there is nothing wrong with the film once it gets going, getting to that point can be a bit of a overdone slog.

The problem with the film is entirely the problem with the script. The film is kind of loaded with cliches from the first frame with our hero and his wife looking like hippie throw backs to the 1960’s. They wear wool clothes, have long hair, live off the land and in harmony with the nature. It’s every hippy cliché come to life. It doesn’t matter if this is the way they were in real life, the handling in the film is so over the top that when the Russians attack I wasn’t moved to tears but laughter. I was snickering all the way through the training. It wasn’t until they get out into the field that the film stopped being silly and became a decent action film.

Where it all goes wrong is with the film’s insistence on being essentially a propaganda piece. The film very much wants to portray Russia as evil and the Ukrainian people as long suffering people who will never back down. As can be seen by recent events during the current war that would seem to be the case, but the presentation here is so loaded that I would be hard pressed to think that the propaganda masters of the last two wars would have gone to the lengths the filmmakers have to play our heartstrings. Its the same problem that the recent spate of Russian WW2 films that hit US shores prior to the invasion of the Ukraine suffered from.  The film vastly improves once the killer spirit of the Ukrainian people is released  to get vengeance but until then you’ll be rolling your eyes more than anything else.

Worth a look for action fans.