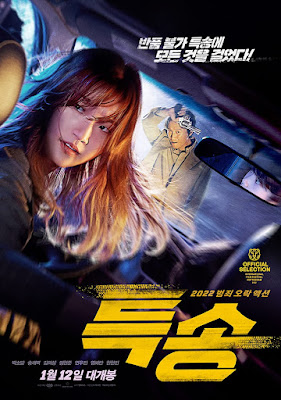 SPECIAL DELIVERY is a blast.

A riff on films like THE TRANSPORTER, BABY DRIVER and THE DRIVERthe film follows a young woman who works for a company that will deliver packages and people no one else will touch. When one of her jobs goes sideways from the start, the two passengers, ends up to be one frightened kid who is being hunted by some really bad guys, our heroine has to do whatever she can to keep herself and the kid safe.

While on a cursory glance the film doesn’t look like anything special, the truth of the matter is the film actually is. Giving us a heroine (actress Park So-dam) we can fall madly in love with, and some bone crushing action sequences the film simply aims to give us as much joy as humanly possible.  Yea we’ve kind of been here before, but at the same time there is something so wonderful about the thrills this film is giving us, we really don’t care. It’s kind of like riding a favorite rollercoaster again and again.

This film is so much fun.

I had a great time and when I was done I was telling friends they had to see it.

A must for action lovers