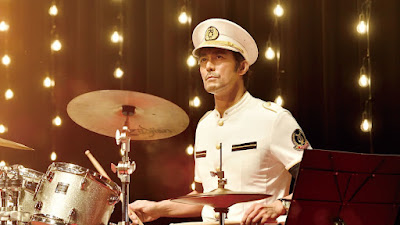 Hiroshi Abe delights in the wonderful OFFBEAT COPS, a wonderful feel good film that will leave you demanding an encore.

The plot of the film has Abe as a notorious lone wolf cop on the track of a group of robbers who call up senior citizens to warn them of scams. Then in the guise of getting information for a survey they ask them where the money in their home is. Moments later a delivery man arrives who then brains the senior and with the help of friends takes all the valuables.  Abe thinks he is on to a lead but he pushes things too far with his Dirty Harry tactics and is sent to be in the police band. As Abe is forced to play nice with others, the crimes escalate…

God bless Hiroshi Abe. One of the best actors working anywhere in the world he has a glorious knack of making the impossible work and making it all look way too damn easy.  While Offbeat Cops  is most certainly a great film, it suffers from weird tonal shifts that should kill the film dead  but some how Abe holds it all together and makes it work. The problem is that the crime stuff is very serious, with graphic violence and freely flowing blood. Its well done but it runs a bit counter to the feel good Abe lost with the band stuff which is lighter. Its never fatal but it never gels, until Abe through force of will makes it work. As I have discussed in several other pieces, I can not understand why Abe hasn’t crossed over into making films in Hollywood. With stunning good looks and a personality that is old Hollywood in wattage mixed with a modern day gravitas one would think he would have becomes an international superstar. On the other hand if Hollywood had grabbed him we probably would have wonderful films such as this.

I really loved this film a great deal. The longer it went on the more I fell under its spell. Not only was I getting misty (Abe jamming with his daughter was awesome)  but I was getting misty repeatedly as the genuine emotion  between characters pulled tears from me.

By the time the film was done  I was in the mood for even more and when the end credits began to roll I groaned and then began yelling at the screen that the film shouldn’t have ended there.

I want a sequel and I want it now.

OFFBEAT COPS is a great film, probably the best film at the New York Asian Film Festival and an absolute must see.