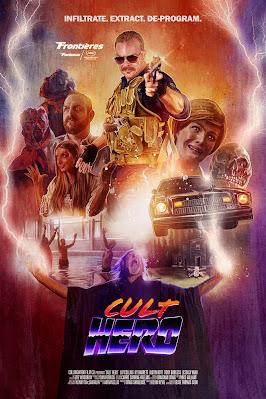 When a cult busting TV star Dale Domazar’s latest bust ends in a mass suicide he has to figure out what’s next. When he’s approached by a woman who thinks she’s joined a cult he jumps in to help her.

This is an amusing comedy about cults and TV fame. The humor is broad and low brow but it produces laughs. While there is a hard edge to the violence, the film pretty much plays everything for laughs.

If there is anything really wrong with the film it’s that hero Domazar is played much too over the top and can be the wrong sort of annoying.  Its not fatal but it makes things less perfect.