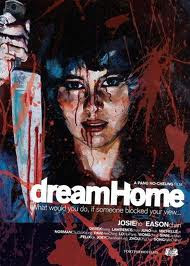 With DREAMHOME playing NYAFF here is my review from back in 2011
This nasty little film showed up 2010's Tribeca Film Festival. Having a weakness for horror films I wanted to go but the schedule wouldn't allow it. The word from the screenings was mixed and I didn't feel the need to bend my schedule to see it. It recently showed up in theaters and on pay per view at the same time so I gave it a go.

The plot has a young woman taking matters into her own hands when the apartment she wants is unavailable. She simply kills the owners...and numerous other people.

To be honest the plot isn't much. I don't think it really works and it only exists to give the filmmakers an excuse to shoot the scenes of carnage.

The scenes of violence in this film will turn the the stomach of most people. There is slicing and dicing and bludgeoning and all sorts of nastiness. Blood flows freely and our heroine is injured just as much as her victims. As someone who has been watching horror films for years I have to say that this is really well done stuff. Any CGI that may have been used blends nicely with the effects and you don't see it...or if you see it you don't notice it.

The sequences of violence are truly nasty in a very realistic way. Where films like Nightmare On Elm Street or the later Saw films will have these grand nasty events that gross you out but don't sit with you because they aren't real, this is a film that does things in such a way that you can see it actually happening in real life. This could be us or our loved ones, and it echoes for that reason. The film also shows us the damage that the attacker can suffer since almost no one goes down without a fight, which means our protagonist takes a few good shots.

I have to say that this is a cousin to the recent award winning film Black Swan, with it's lead character who is slowly going nuts. However unlike Black Swan our heroine here wins our sympathy, even as she repulses us. Despite her being as nuts as an outhouse rat to begin with with, we still relate to her, something we never really do with Natalie Portman's character.

The cinematography in this film is amazing. It's some of the finest in any horror movie. Everywhere we go looks magnificent. If this wasn't a gory horror film I could see it getting awards for how good it looks. Then again it was shot by the crew that director Wong Kar-Wai uses.

The opening title sequence is amazing and rarely have any apartment blocks looked this good. Watching the film on pay per view I found myself rewatching the opening credits a second time simply because they look so cool. While not as jaw dropping as the opening of Gaspar Noe's Into The Void, they are close. I wish I had seen this in a theater just so I could have seen the credits on a really big screen.

If only the plot was as good as the bits, this would be a classic. As it stands now, it's a very gory film that I can only recommend to gorehounds and those who like violent set pieces. If you're one of those track this film down. All others need not apply.
Posted by Steve Kopian at July 16, 2022