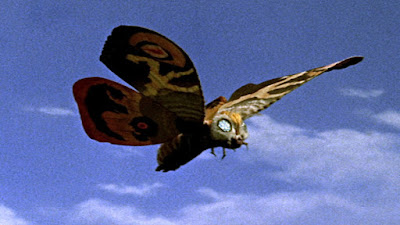 Getting a rare subtitled big screen showing MOTHRA is playing Friday at the Japan Society.

I have a mixed relationship with the film, as I do with many of the kaiju films from the 1960’s and 70’s in that while you remember the giant monster parts, there is frequently a lot of other stuff going on, and frequently that stuff isn’t as interesting.

The film has two tiny women discovered on a distant island by a business man. The fairies or peanuts, are taken to Tokyo by evil business men who want to exploit them. The trouble is that they are the protectors of Mothra who comes from island looking to rescue the women.

The Mothra sections of the film are great fun, unfortunately much of the film concerns the efforts to exploit the girls.  While not bad it’s not quite as exciting as the rest and anyone going into the film expecting lots of giant moster mayhem are going to be disappointed.  I suspect that the Japan Society people are going to blanche at my saying that, but it’s a fair warning since when I saw this film riffed on a Rifftrax broadcast some of the people around me were commenting on the non-Mothra sequences.

Still the Mothra stuff is choice and it’s the reason I continue to return to the film now and again.