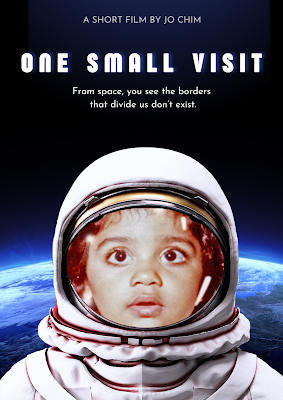 It sounds like the set up for a joke, but its not. In the days following the moon landing, the Abrahams are an Indian family on a road trip and stumbled upon the home of Neil Armstrong’s parents and knocked on the door. What happened was probably not what you think.

This little known true story was related to director Josephine Chim by her friend who was a baby at the time it happened. Chimwas intrigued and spent hours interviewing everyone who was there via zoom.  She then turned it into this short film.

The result is an unexpectedly rich tale that raises all sort of intriguing themes and issues beyond the heart warming premise of people connecting simply because despite it all we are all human. In a weird way the film is almost two films in one, one is the story of the dark skinned Abrahams traveling through Middle America in the 1960’s. They are very aware of the racism galloping through the places they are in but they go along anyway. The tale flips in the second half when they meet the Armstrongs and we see the connections between people blossom. While the film feels like two films it really isn’t because the first half makes the second all the more touching.

Honestly my reaction to seeing the film was that even at 32 minutes this film is too short. There is much too much to the tale, and specifically to OC, the father's, connection to the civil rights movement.  Reading the stories in the post credits text I was shaking my head wondering why some of that wasn’t in the film. Thankfully, director Chim is in the early stage of preparing a feature version of the tale.

This is a super little film recounting a wonderful story.