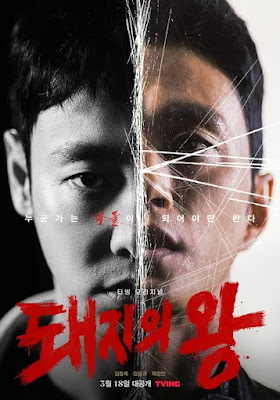 Yeon Sang-ho's (TRAIN TO BUSAN) first film was an animated film called THE KING OF PIGS. A memory play about two friends meeting after several years at which time they talk about the years when they were bullied. It's a dark gut punch of film that rocked audiences at Fantasia and the New York Asian Film Festival in 2012. The film has been turned into a twelve hour miniseries and while it may not have the concentrated punch of the original film, it still is compelling viewing.

The main thrust of the plot has the cops looking for  a serial killer who is seems to be working through the bullies who tormented them. The thing is nothing is quite as clear cut as it seems. Along the way we go back and forth through time as we are forced to relive the pain and suffering of being a kid.

When you see this series you best clear the decks because you are going to want to go through all twelve episodes in one sitting  when they become available (they screened 4 episodes at Fantasia).  I made the major mistake of not realizing that there were twelve episodes. Had I known that I wouldn't have watched the the four episodes I was given because I was left hanging.

I dislike reviewing a series unless I can see it all because one never know if the later episodes carry to the end. Having read a bit on the series and knowing the source I think this series is going to be killer.

One word of warning, this is dark stuff. Yes it has to do with a serial killer, but more importantly the series is long for examination of bullying. Its a film that deals with the darkness of human existence. If you don't want to deal with it don't watch this.

One of the unexpected finds of Fantasia.