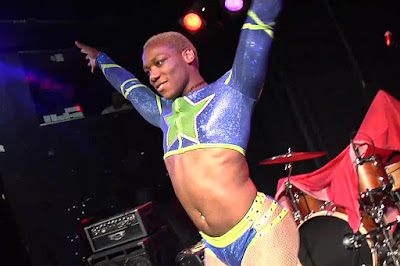 Ry Levey‘s OUT IN THE RING is a hell of a film. A long time in coming the film is a look at the world of professional wrestling and it’s relationship with LGBTQ community.

Beginning with the obvious statement that at its heart the sport is very homoerotic, pointing out it involves big people in their underwear rolling round on the floor, it moves on to the history of how gays were viewed in the sport and how its changed over time.  Containing a seeming never ending string of extremely knowledgeable talking heads we see the history of the sport and how many wrestlers could express themselves without specifically coming out. We see how wrestling co-opted LGBTQ culture and used it for its own ends and how younger wrestlers are taking it back and openly turning it into their own form of self expression. Additionally the film explains how the sport has helped man LGBTQ youth and adults connect with something outside of themselves.

This is is a magnificent film. Its one of those films that takes what you think you already know and reveals a way bigger picture than you could ever imagine.  I went from watching it with a half-assed attitude to falling into it and hanging on every word. I mean if nothing else this film is so full of great stories that are told with real passion that even if the subject wasn't important this would still be a must see.

What kills me about the film is that this is not hitting bigger fests. This should be at the big documentary fests not just Fantasia. That is not a slap at Fantasia who has the great programmers who understand this is not a "genre film" but a great one, rather at many other fest specializing in important docs because this is a film that looks at how the LGBTQ community is viewed through a lens that willl open up so many eyes.