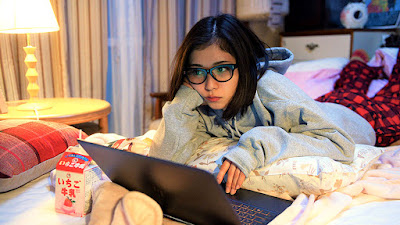 Premiering on Blu Ray this week TREMBLE ALL YOU WANT is a film I saw back in 2018 for Japan Cuts but never reviewed. The problem was I was backed up with three other festivals at the same time and something had to go and this was was the one I pushed overboard. It was not because it was a bad film but purely that it is a solid if unremarkable romantic comedy that I couldn't bring anything to the table to say that would make my review stand out.

The plot of the film has a young woman, ten years out of high school refusing to date or acknowledge anyone romantically because she is still madly in love with her high school crush. He doesn't really know she exists but that doesn't stop her from being in love. Things become complicated when one of her co-workers asks her out.

This is a good little romantic comedy that ticks all the right boxes. This is a film that does what a romantic comedy is supposed to do, which is make you feel warm and fuzzy and then get off. WHich is enough. Honestly it is good enough that I remembered the film to years on and didn't have to look it up to see what it was and I found I could describe the ending in detail (my memory matched my notes).  I did  have to check my notes to see why I didn't actually review it.

It's definitely worth a look - more so if you love romcoms.
Posted by Steve Kopian at July 26, 2022