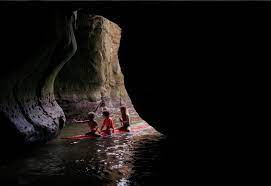 Three little girls drift off to a deserted island and have encounters with seals and sea elephants.

A beautiful nature documentary is interrupted by a home movie of a non-thrilling family thriller. This is one of the few Fantasia films I've ever seen where I can’t understand why it was programmed at the festival. While not a “bad” film it is completely uninvolving. Yes the cinematography and nature images are stunning. They are the sort  of images you want to see huge. They are impressive and if this was a documentary they would make this a must see.

The problem with the film is the sections of the films focusing on the little girls. Shot as a sort of cinema verité, the little girl stuff is so artificial that we never fall into it. Yes it feels like its based on real life, but its shot in a way that lets us instantly know this is a “movie”.  It feels contrived. Worse once the film gets going and the trouble starts,  and the film tries  to make us  feel like the girls were in some sort of danger, but you never feet it. There was no suspense, you always felt like they were going to be okay because at no point did we see there was any real danger. Nothing “bad” happens anywhere and the girls skate by, such as when one sister catches her sibling when she falls off the counter. The film simply signals all along that everything will be alright.

Worse I felt like I was being forced to watch the directors children be cute.

For my money this is a very expensive home movie.