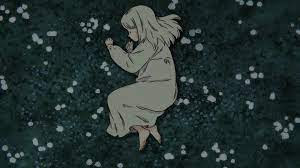 THE GIRL FROM THE OTHER SIDE is one of the most beautiful films I’ve seen this year. I really hope to get a chance to see it on the big screen.

Set in an other time and place. The film concerns a young girl named Shiva who wakes up in a forest. It is outside a village which fears outsiders who maybe cursed. If you touch them you will become cursed yourself.  This involves becoming some sort of monster.

One of the cursed finds Shiva and takes her to a house where they begin to spend time together. She takes to calling him teacher and becomes a father figure to her.

This is a gloriously lyric film. Its quiet and gentle and probably not what anyone looking for ray guns and car crashes will like. On the other hands those who want a beautiful tale of characters and emotions are going to be moved. All I wanted to do was tell all of my friends that they had to see this glorious gem of a film.

This is true cinematic.