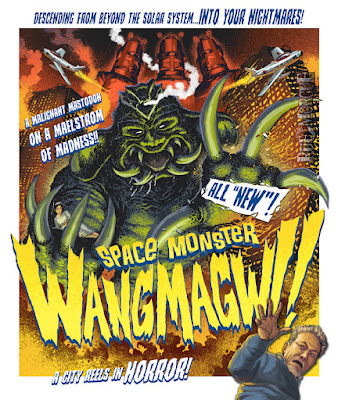 Seeing SPACE MONSTER WANGMAGWI was one of the greatest cinematic experiences of 2022. The only way it could have been better would have been to see it with a rowdy audience ready for fun.
The film is a long lost kaiju film from Korea. It hasn’t been seen in decades and a print was recently discovered and is now being unleased on the world.
The film has a ship from the far off Gamma planet coming to earth as a Typhoon is supposed to strike and unleashing a monster on South Korea to see how earth people would react.
Played deadly serious the film is in fact full of jaw dropping turns:
A typhoon is coming and hundreds of deaths are expected, but one the monster comes the typhoon angle disappears.
A wedding is interrupted by the monster, and the bride is worried that the fighter pilot groom really just running out on her.
The Monster picks up the bride and carries her around for the whole film- despite everything that happens.
A little kid climbs the monster and goes in its ear and up and out its nose.
Two men challenge each other not to run from the monster with the prize being one of the men’s wife.
Looking at times like the Japanese Starman films, at other times it looks like a home movie with cheap ass sets and costumes. Because the film is played so straight you just go with it even as you are giggling.
I spent the whole film talking to the screen and replaying whole sections of the film because I had to make sure I really was seeing what I was seeing.
This is a jaw dropping cinematic experience. I’ve never quite seen anything like it because within all the cheese there are some really well done sequences.
You have to see this. Its wild and wanton and full of stock footage.
Wow
Just
WOW.
Recommended
Posted by Steve Kopian at July 27, 2022