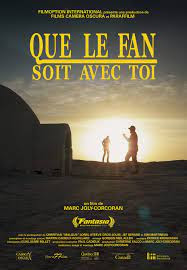 I'm not a Star Wars Fan.  There was a time around the original films when I really loved them but the stories drifted and things fell off with the prequels and I stopped caring- though I did go to all the new films as they came out. And because I'm not a big fan of the series I was hesitant to see QUE LE FAN SOIT AVEC TOI but it filled a slot....and it ended up making me tear up as I connected to it in all sorts of unexpected ways.

The film is a look at Star Wars fandom through the lives of three guys. Malgus, ais the leader of the cosplay group La Forteresse impériale. Steeve Gros-Louis, owner of a restaurant and an collector and dealer of merchandise. Jef is a figure in the fan community with a podcast on the whole Star Wars Universe. Through them we see not just how Star Wars affects people’s lives, but also how fandom creates community and bring meaning to peoples lives.

This is a great film. Yea it’s about three guys who love Star Wars but the truth is the film speaks volumes beyond that. This is a film about fandom and people following their passions. As some one involved in various forms of fandom (film in particular) I could relate to what I was seeing. I completely understood the passion.  While I didn’t care about the visit to the filming locations of the first Star Wars film, I completely understood the passion in the eyes and the in the voice. If I was going to a place that was part of my waking dreams I too would hug the furniture.

While I have seen multiple films on fandom this maybe the best. It’s the best because it transcends just on the specific fandom.