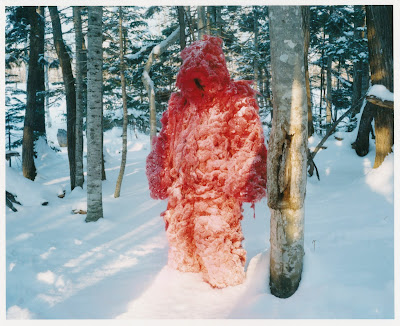 Shari, is a small town on Shiretoko Peninsula on the easternmost part of Japan’s northernmost island Hokkaido.  Its a place of interesting people and a blood red monster.
One part documentary, one part essay, one part experimental film. and one part fairy tale. Its a film that is kind of indescribable except it you've seen the other films of director Nao Yoshiaga. Working at a feature length this film is a lot of joys to take in. Its a film that you have to give yourself over to and just go with. You have to find the film's rhythms and click with them- once you do it's a hell of a ride.
If you like experimental or avant garde films you'll probably love this. This is the sort of thing that the New York Film Festival might run in their experimental side bar or that the Lincoln Center series The Art of The Real would highlight.
If you like off the beaten path docs this film is worth a shot.
Posted by Steve Kopian at July 27, 2022