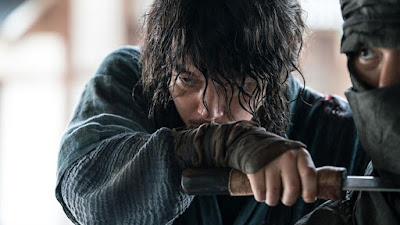 A swordsman who had his eye sight damaged protecting the king is forced back into action when his daughter (really the daughter of the former king he was tasked with protecting) is kidnapped by some really bad Chinese dudes.

The first pairing of Jang Hyuk and director  Choi Jae-Hun got it’s first big screen showing at New York Asian Film Festival. Originally slated to release during covid, it ended up streaming and blowing up the services. Its success spawned the current hit THE KILLER. I completely understand why.

Though its based on actual events, you’re not going to care about the politics. The machinations of the lords trying not to get steamrolled by cliched Chinese bullies is the least interesting part of the film. What you want to see is Jang Hyuk becoming a one man army taking out anyone who would even think of hurting his daughter. This is awesome set piece after set piece as the near blind swordsman carves his way through the opposing forces. You understand why one of the big bad flees when he sees the blind guy taking out his army. Hyuk maybe even a more impressive blind swordsman than Zatoichi. This was a film that had the audience audibly reacting to his feats.

Actually what most people are going to love is the fights are a combination of typical sword work mixed with martial arts and other types of fighting. It feels realer than most film fights.

This is a must when it hits screens via Wellgo. 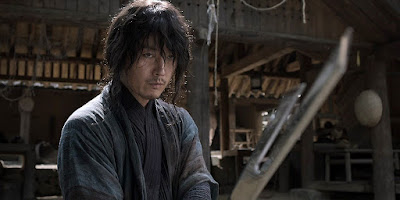