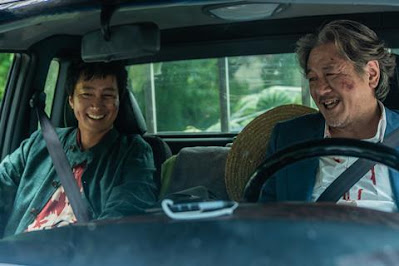 Choi Min-sik gives a performance for the ages in HEAVEN TO THE LAND OF HAPPINESS . In all seriousness this is one of the greatest performances I’ve ever seen.  I should add he is matched by Park Hae-il who is just as good in a less showy role.  The pair give performances that should be studied as how to play realistic buddies on screen.
The Plot of the film has  inmate 203 (Choi Min-sik) collapsing in prison only to discover he has at most two weeks left to live. Park Hae-il plays  Nam Sik, a worker in the prison who is stealing an expensive medicine he needs to stay alive. When an opportunity presents itself the pair escape from the prison, in a hearse with a coffin full of mob money in the back. The film then becomes a road film as the pair try to stay ahead of the mob, the police and get to 203’s daughter before time literally runs out.
One of the greatest buddy films ever made this films all of the characters dead nuts right. This is not the witty repartee of things like BAD BOYS or 48 HOURS or any typical Hollywood buddy film, but something deeper. We feel every emotion the pair feels and we understand how they come to love and trust each other. We understand why they yell at each other and why, when the chips are down they take care of each other.  It’s a relationship that produces tears…every damn one of which is earned ten times over.
While frequently funny the film is not a comedy. The humor comes from the situations and not joke writers. These are, mostly, situations we could find ourselves in.
I absolutely loved this film.  Sitting watching it I was completely riveted. I just stared at the screen never looking away except to try and find a tissue to wipe away one of the well earned tears.
I need to mention the performances of Choi Min-sik again. This should get him every award under the sun. It’s unlikely to happen but I can dream. Watch his whole being become 203. Watch how joy at seeing something again for the “first” time fills him, as it replaced by sadness as knowing it’s the last time for him.  Listen to the concern in his voice as he screams at his friend at leaving the medicine he needs to stay alive behind. You  can hear the tone of man about to die angry that a stupid mistake might mean his friend  would go before him. This is as perfect a performance as I’ve ever seen. When you see the film enjoy the film, but watch Min-sik’s seeming non-performance take it all to another level.
This is a magnificent movie. One of the very best films of 2022 and an absolute must see.
Posted by Steve Kopian at July 31, 2022