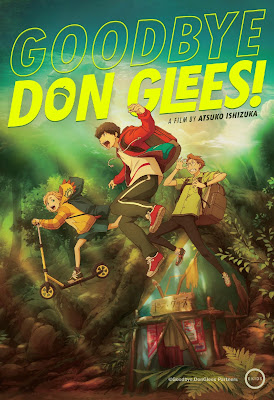 The official  synopsis of the film says its about three friends who go into the woods in order to find a drone that will clear them of setting a fire. The reality is that the film is a complex look at friendship and our place in the world and each other's lives

This is a lovely memory tale. Its a tale that gets all of the little bits of being a geeky teen friend right. There was so much I could relate to from when I was geeky teen.

If you ever want to know what animation can do to enhance a story consider that this is pretty much a straight forward drama  However the created images and color palette, things not possible in the real world with out looking wrong, here add emotional depth. The hand drawn world trumps the real and instantly puts us in a head space from frame one.

As good as much of this film is I don't know if it all works. The structure of a memory play doesn't always hold together. The problem isn't the structure at self rather it's that early on director Atseuko Ishizuka can be felt manipulating things.  You feel her angling for the end game, and while it did make me misty, I kind of felt it wasn't wholly earned. I don't want to feel manipulated.

Still outside of that this is a really cool film and I for one can't wait until it's done with the festival run and I can see it in theater with my niece.