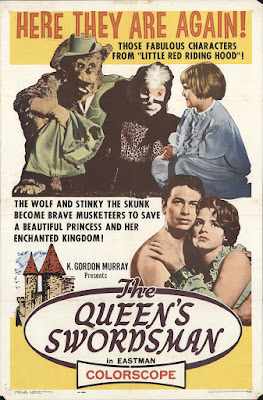 This film in the series of films featuring the Big Bad Wolf and the skunk Stinky, is not only probably the best of the bunch but a good film on it's own terms.

This time out Stinky and the Wolf are raising a child they found lost in the woods. Years have passed and as the infant has grown the pair realize that they need more than they can provide living in the woods so they go to town and end up as musketeers for the king and queen. They are instrumental in helping to save the kingdom from a take over.

Playing more like a historical swashbuckler with a skunk and Wolf in the lead than a kids film THE QUEEN'S SWORDSMAN is a really a grand adventure. Filled with action and intrigue this would have been a classic film had they simply removed the two costumed leads with real people.  Frankly this is rather an adult film since so many people actually die.  You could never release this film now because the family groups would have a fit.

The key to enjoying this film is getting past the fact that the film's leads are two people in ill fitting costumes who have been oddly dubbed. Its a weird experience watching everyone interact with these odd characters but if you've seen the other films in the series you know to just go with it simply because the films are so much fun.

The film like the others in the series are must sees for anyone who loves cinema.  They are truly wonderful pieces of crazy ass fantasy from an innocent time (hell, no one blinks when a live alligator is put in a bed with a little kid) that film lovers must see....

...sadly I don't think the films are available legally in the US.  I know Something Weird had released them on VHS years ago  but I believe at some point the K Gordon Murray estate put a stop to that and  they have been camping down on streaming releases. I could be wrong, but I know when I originally covered some of the films in 2011 the only way to get the films were the collectors market. And if memory serves I was told that some grand release of all of the films was coming by the estate who thought they could make a mint- except that the films had been out of circulation out side of Something Weird for thirty years so two generations of film fans had no idea what these films were. I haven't tried to chase down the status since then so that could all be wrong. (Please feel free to correct me in the comments)

You have to track this and the other films in the sequence down, get some friends, some drinks and popcorn and go crazy on a Saturday night.

Actually what I would love is for a film festival like New York to do is a small side bar of these whacked out films so they get back into the discussion....
Posted by Steve Kopian at July 02, 2022