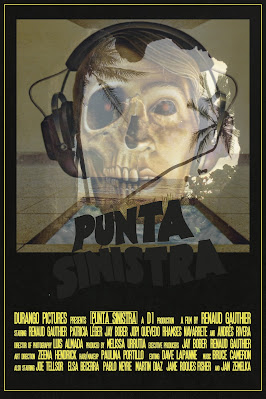 A journalist decides to hunt a mythical plane that went down on the coast of Mexico. Supposedly it was transporting a cartel cargo. However he quickly realizes he’s in over his head as he realizes that there are other people looking for the plane and they will stop at nothing to get it.

If you are willing to go with the restrictions of the microbudget (the guns don’t actually fire, the plane doesn’t fly) this is a solid little thriller. Running a breezy 63 minutes PUNTA SINISTRA move like the wind as it everyone seems to be up to no good. Kudos to director Renaud Gauthier for making a film that makes no excuses and simply tells the fest story he can. Frankly had the material from Fantasia not mentioned the micro budget I wouldn’t have noticed chaulking any issues to a stylistic choice.

I you want to see a small gem, this film is for you.