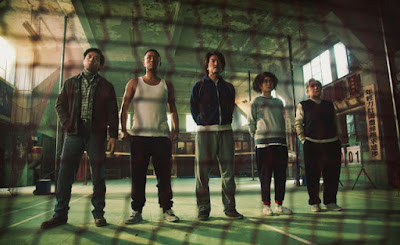 This is a repost of my review from 2015 when the film premiered at NYAFF.
Fornicate your mammaries - curse repeatedly uttered in FULL STRIKE

Ten years ago a badminton played  by Josie Ho was at the top of her game and the badminton world, her antics on the court and off earned her the nickname The Beast. When it all turned to crap she retreated from the game, gained weight and ended up supported by her brother. When a shuttlecock shaped meteor crashes near her she finds her self at a seeming abandoned badminton academy. Once there she meets three notorious criminals trying to go straight by being professional badminton players...

I think that's about the first ten or fifteen minutes of FULL STRIKE a largely nonsensical but very very funny film. This is a film that mixes every type humor into a concoction that is the sort of thing where you need only wait a few minutes for something that will come along that will have you laughing so hard you're doubled over in pain when you hit your head on the seat in front of you.

I have no idea how to describe this film- I want to tell you details but a great deal of the fun is finding out who everyone is and how they interact. To tell you too much will take away the joy of discovery.

I will say that its like every sort of sport film you could think of thrown into a blender with every style of humor. There is slapstick and word play and very clever send ups and really weird flights of fantasy. There are odd ball lines like the opening line or crab boy or these long rambling non sequitur by one of the characters that you would think are mistranslated except that at one point after a great deal of verbal nonsense has been thrown around one of the characters asks what all the weird lines mean-its not bad translation its just characters who are on their own planet.

I would add that the film does have a real heart. At one point Josie Ho's character hits a low spot and she calls her brother. She expects on some level to be yelled at but his reply about how she can do whatever she wants and he'll be hind her is wonderfully touching. Equally touching is the ending which is decidedly not something anyone is going to guess going in.

If the film has any real flaw is that the film is wildly all over the place. Things happen for no reason or things happen just for a laugh. There is a long side story involving thieves who know the badminton players that kind of goes nowhere-even if it is used to set up some stuff toward the end. While the weird brain farts do produce laughs and create truly memorable characters it kind of leaves you wondering what some of it was about.

On the other hand, and most importantly none of that matters because this film is just so god damned funny and uplifting- Trust me this movie will make you feel good.

The film played its only one time at the 2015 New York Asian Film Festival (How could you have missed it?) but but its back now for a new screening..

This was one of the funniest films of 2015 and a big ball of joy.