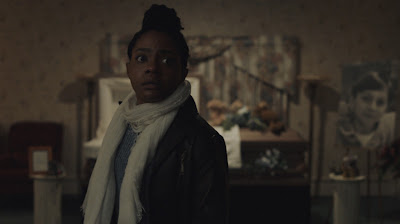 Director Andy Mitton (YELLOWBRICKROAD, WE GO ON and WITCH AT THE WINDOW) returns with another okay film.
The plot of the film has a woman leaving a isolation in country during the coivid out break to help a friend who is having nightmares of a dark figure in a plague mask called the Harbinger, She quickly learns that the figure is real and is trying to come into our world.
Full disclosure outside of seeing YELLOWBROOKROAD in the theater where the film's aggressive sound design made it one of my favorite film going experiences (though it paled on a second visit on home video), I have found Mitton's films to be good, but nothing special. He never quite manages to make a wholly scary film. Mostly I find that his set ups never quite manage to follow through to his endings.  His films are not bad but  to me they are nothing special.
Such is the case with HARBINGER. It's good but nothing special. I was never scared. I think part of the problem is the pacing is off. After a good set up we shift to the country for a bit and then by the time we get back to the city the film has to restart building suspense but it never gets traction. I never became invested, though I stayed to the end because I was curious.where it's going.
As I've said about Mitton's other films, worth a look for horror fans but wait for streaming.
Posted by Steve Kopian at July 21, 2022