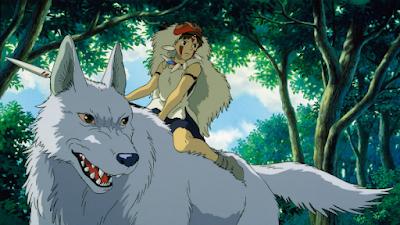 Hiyao Miyazaki’s Princess Mononoke is a masterpiece. It’s a glorious fantasy about the fight against a monster that is devouring the forest and the people who fight to protect it.

Yes I know this an over simplification on what the film is, but it’s enough to get you started.

This is the film that got me hooked on Studio Ghibli. Seeing the film in a wonderfully subtitled version I was in awe of the epic scope of the film and the depth of the emotion. It was a hell of an experience. If you can you need to see the film subtitled.

I say this because when the film played the New York Film Festival in a dubbed version “written by” Neil Gaiman, it was a version that no one was happy. Miramax who paid for the dub tinkered with a script that Gaiman wasn’t happy with since what was said in Japanese simply couldn’t be said simply in English. Yes the film has a great voice cast but the script is a pale reflection of the original. (Even the Ghibli dub, they always did their own English dubs never surfaced in the US)

As the final film in their summer Anime series the Japan Society is running MONOKE in the right subtitled version. If you’ve never seen the film  or you’ve only seen it dubbed (or in a subtitled version based on the Gaiman dub) you need to see this. It will move you. It's visually over powering  emotionally moving story that is considered to be one of the greatest films ever made (full stop).