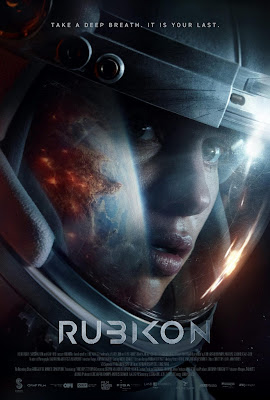 In 2056 the world is heavily polluted. Most of the population lives in sealed domes. Orbiting the earth is Rubikon, a self sufficient space station. Right after a crew change clouds move across the globe essentially wiping everyone out. A debate then  breaks out between the crew as to whether they should stay or return to earth to see if there are survivors.

While there is some suspense and a few tense sequences, this is really a just a long discussion about the state of the world and what we should do if the world slides off the table ecologically. Things shift into discussions of class once survivors are contacted via radio.  This is a film that's all about the ideas.

To be honest I like the film but I didn't love it.  For all the efforts to make this film move the film is largely static. The film is all talk and little action. While the discussion is good and it holds our attention, there was a point where I started to disconnect because the balance of run time to lack of motion didn't work for me.

Additionally it doesn't help that the world the doesn't wholly work. The film set 30 years ahead but it there are turns that don't ring true because the technological changes are a bit too radical for 30 years on- not that we can't be there but that the scale of the building might be too much. Additionally I'm trying to figure out little turns like why they would hide an old radio in a wall. Its not fatal but it's the sort of thing that distracted me from the main plot.

Reservations aside if you want a heady discussion of where we are headed this is for you.