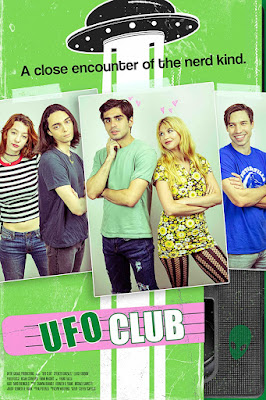 Set in 1998 UFO CLUB concerns a bright high school kid, with a love of science fiction and the paranormal, who gets involved in trying to rescue his idol after he gets in trouble after a UFO crash on Long Island. In the process the socially backward young man ends up falling for a beautiful young woman who might be the key to the mystery.

Living on Long Island my ears perked up when I saw the film featured a UFO crash in its plot line.  I was curious if the film was going to reference a supposed 1989 UFO crash on the eastern end of the Island that is still a source of controversy for many.  It isn’t and that’s perfectly fine  since this is a sweet little comedy romance science fiction film hits most of the right notes.

That the film works as well as it does is largely  to the cast who charm us enough that we happily follow them anywhere. Spencer T Gonzalez as William charming. He gets the odd ticks of being an awkward nerd dead nuts right. Having grown up as one I related to him. As for the rest of the cast they matched him note for note.

While writer director Steven Tsapelas does an excellent job in turning out a small budget feature, I also need to give a shout out to the company behind the film In The Garage Productions. I’ve been watching their output over the last few years and I have been delighted by what I’ve been seeing. Somehow they have been doing what most big studios can’t do and that is turn out entertaining confections on a regular basis.

UFO CLUB is a tasty confection and is recommended when it opens the The Long Island International Film Expo tonight.