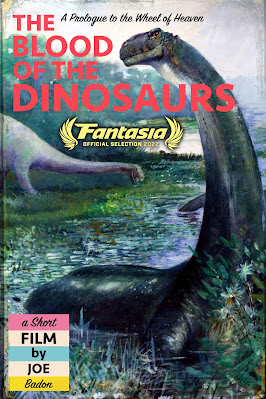 Joe Badon is a director I really like. I loved his SISTER TEMPEST and THE GOD INSIDE MY EAR so I was looking forward to seeing his latest film, the short THE BLOOD OF THE DINOSAURS.

The film is  a short film that begins with with two people talking about the film we are going to see. The focus then shifts into a weird kids TV show ala Mr Rogers but on acid.  And then it goes all over the place ending with the birth of a girl named Purity.

As much as love Joe Badon's films I have to say "I'm sorry Joe, this film is a mess" .

Its all over the place with all sorts of things being thrown at us which would be fine except the film only runs 14 minutes and there is too much here for that amount of time. Worse the film is supposed to lead into a film  called THE WHEEL OF HEAVEN and it ends with the couple from the start talking about that film so as a result the film doesn't end it just stops. Having managed to get the motor running and the car moving down the road he suddenly turns of the engine. We are left wanting to know where this goes but we are going to have to wait.

We shouldn't have to wait- More to the point you can't start and stop Joe Badon's films- you have to watch them from start  to finish in one go or else you don't get the full effect. I remember watching both of Badon's earlier features and loving the pacing, loving how you have to stay with them and not look away. Waiting and waiting  and then having it all click in a brilliant "AH HA" moment. Had I stopped or walked away the films would have collapsed. Here Badon slams on the breaks and he cuts his own throat. He stops us before he should have- now when we see the next film we will need to see this film again to have that one work.

I honestly don't understand what Badon did or why. We should have had a whole film not a proof of concept.

Honestly this is interesting (its a Badon film so how could it not be?) and it works until it stops. But the film stops and I want to see where this story is going. If you are like me not having  the whole story is just going to frustrate you because nothing is resolved.

For my money wait until Badon has the whole story filmed- then watch that because what's here makes me think he's going to be telling a hell of a story. 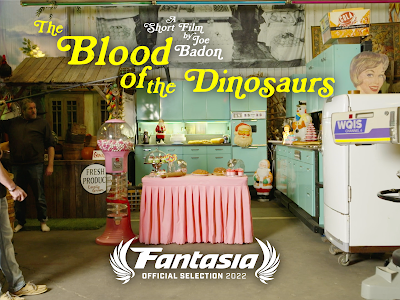