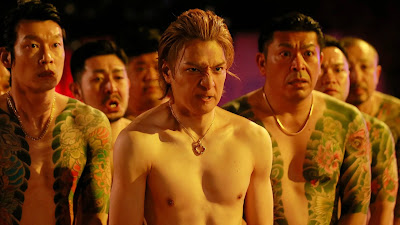 Takashi Miike concludes his MOLE SONG trilogy with more insanity as only he can inflict upon the world.

As the story winds down Reiji Kikukawa, the mole of the title, is in Italy with his gang. They are working to bring  tons of drugs disguised as  pasta into Japan. However Reiji has been told he needs to wrap things up. How is he going to arrest the boss and what of the inevitable betrayal of his "brother"?

This is a good ending to the series. Having been an early adopter of the series, I fell madly in love with the first film and I was equally thrilled with the second, I'm glad we get to have it all more or less resolved. I'm also thrilled that the insanity level remains  high. There are lots of laughs here, almost all will make even people walking in off the street laugh, though  jokes will be funnier many if you've been riding along.  They are almost all low brow but really really clever low brow.

I roared from start to finish.

As good as the film is it isn't quite up to the first two films. It's not that there is anything wrong with the film, rather it's because the film is saddled with FINAL in the title.  Because the film is a final chapter everything must come to an end so things are forced to bend toward an ending.  The film doesn't have the pure joy of the first two where anything could and did happen. (That said some truly unexpected things happen here).

The film also suffers slightly with a number of flashbacks to the first film. There is a bit too much refering back.

Quibbles aside, this film is a joy. It's a wonderful send off to good friends.