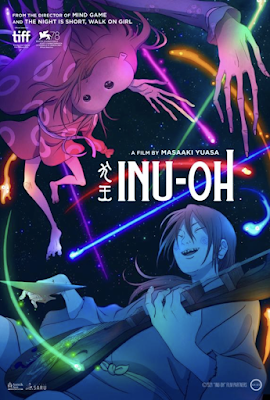 Masaaki Yuasa (MIND GAME) returns with a film that completely blew me away. A film of great beauty and complexity Inu-oh rocked my world.

Structured as a musical story performance the film tells the story of a musician who was blinded years when he and his father had attempted to retrieve a legendary sword from the bottom of the sea. While they found the sword, unsheathing it killed the boys father and left him blind. He then set off on a quest to find a hidden city and the stories that lie there. Along the way he takes up music and makes friends with a deformed young man who wears a mask made from a gourd. All around them is magic and spirits.

I am in total awe of this film. From the beauty of the art, to the amazing choices of the animation and the complexity of the story telling this is as good as filmmaking, of any sort gets.

Yuasa’s animation is perfect. The images are truly beautiful and they made me tear up. However they don’t exist to just be beautiful but to drive the story forward. Everything is done for maximum effect. Styles change with in a scene because the shot has to be a certain way to say something about what we are seeing. The images are not just telling the story, but the styles and inclusions and deletions add coloring to everything we are seeing. They are so vital to the success of the film that I don’t think the story would have worked if it was told in any other way.

The story construction is spot on. Nothing is extraneous. Every word we hear, every note that is played and every shot we see moves things forward. Everything that happens builds toward the next turn. I love how little throw away notations  echo later on in the film. Best of all the construction feels completely natural, with the result being that we care about the characters and are moved when things happen to them.

I am in genuine awe of his film. In all of the hundreds of animated films I’ve seen over the year, nay, in all of the tens of thousands of motion pictures, and a similar number of works of art that I’ve seen over the years almost no film has left me this gob smacked tearing up staring in jaw hanging awe.  This not only a great cinematic achievement but also a true work of art.