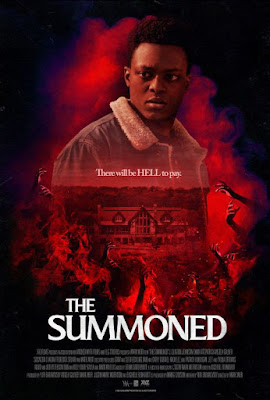 Working class guy goes with his rock star girlfriend to a weekend getaway run by a popular self help guru. Once there they run into two of her friends and discovers his link to a Faustian bargain.

THE SUMMONED reminded me of a number of late 70’s and early 80’s films set in retreats where there are dark things lurking behind the surface. This is exactly the sort of film that I would have been running all over Long Island to see right after I got my drivers license right before home video pushed the B films to direct to video.

To be honest while I enjoyed the hell of the film I don’t think it’s perfect. Frederick Stewart as Dr Frost is much too goofy and he takes the edge off the tension because he is never sinister enough. The film also seems to have been working with required quotas of both cliché turns and really cool ones, since for everything I never saw coming there was another turn that had me shaking my head wondering why they made that choice.  It was the sort of thing that made me wonder why they couldn’t have just gone with the cool stuff.

Quibbles aside I had a good time sitting in my chair and eating popcorn.