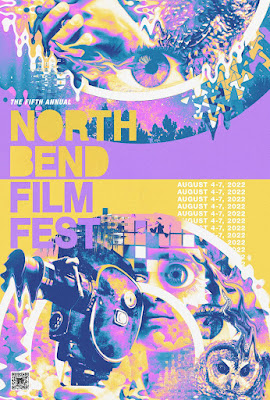 NBFF to honor Mali Elfman with the Dulac Vanguard Filmmaker Award, host the US premiere of Quentin Dupieux’s INCREDIBLE BUT TRUE, and present a lineup of boundary-pushing contemporary cinema.

This year’s first Centerpiece film comes from filmmaker Mali Elfman, who is also the recipient of the festival's Dulac Vanguard Filmmaker Award. The award, named for French filmmaker, film theorist, and activist Germaine Dulac, whose 1928 film THE SEASHELL AND THE CLERGYMAN is regarded as the defining first film of the surrealist movement, honors an extraordinary achievement in filmmaking from a director as seen in their first or second feature.

In Elfman’s directorial debut feature NEXT EXIT, a scientist proves the existence of an afterlife, causing two deeply tormented strangers to travel cross-country together to take part in the study and voluntarily end their lives. "Elfman has gifted us with a compassionate work of genre fiction, taking a bold premise and balancing terror, humor and empathy with a graceful hand," says Senior Programmer Joseph Hernandez. "Dedicating her career to a love of genre film, championing female filmmakers and building a separate body of work in the medium of immersive experiences, Mali Elfman is the kind of multi-disciplinary artist that completely embodies the spirit of North Bend Film Festival. We're elated to award her the second-ever Dulac."

The second Centerpiece film is SWALLOWED from director Carter Smith (THE RUINS). This disturbing tale of two best friends mixes drug smuggling, bugs and horrific intimacy that will leave audiences’ skin crawling. Returning to collaborate with Smith in this dirty and disturbing nightmare is Jena Malone, with an unforgettable supporting performance from the queer horror icon Mark Patton, as well.

While Elvis is currently making a splash in mainstream cinema, the North Bend Film Festival will celebrate the 20th Anniversary of Don Coscarelli’s BUBBA HO-TEP, the real story (or is it?) of Elvis and JFK. This totally bizarre cult-comedy is proudly presented at the festival for attendees to discover or rediscover on the big screen.

Rounding out the feature lineup is the US premiere of INCREDIBLE BUT TRUE, the latest surreal vision from French auteur Quentin Dupieux; SIRENS, a standout documentary about the Middle East’s first all-female thrash metal band; RAQUEL 1:1, Mariana Bastos’ tense tale of religious fanaticism; and supernatural buddy comedy THE CIVIL DEAD.

The shorts programs are once again highlighted by three different blocks; Home Transmissions, featuring shorts from filmmakers in the PNW, Something Strange, bolstering short films that are wonderfully weird, and Cinema Vista, which highlights genre-bending shorts.

On the events side, the popular Strange Storytelling Hour returns, hosted by Seattle-based storyteller, comedian, and weirdo Emmett Montgomery. For those looking for something more on the spooky side, there is Ghost Hunting 101, an introduction to paranormal investigation, ghost hunting with local area haunts also explained.

The North Bend Film Festival badges are now on sale. Unlike last year, the four day event has returned to a completely in-person event. Attendees can purchase a Vista Badge, which includes tickets to 10 films, access to select events and meetups. 12-film Industry Badges are also available for those who are a part of the entertainment, media or immersive tech industries, and are subject to approval. Early passholder selection begins today with individual tickets going on sale Friday at noon, including the popular locals-only discount!

To buy a pass, visit: https://northbend2022.eventive.org/passes/buy

I LOVE MY DAD

A desparate father does the unthinkable in order to stay in touch with his estranged, recently suicidal son—he creates a fake Facebook profile using pictures of a local diner waitress and catfishes him. Writer/director James Morosini stars opposite the great Patton Oswalt in this unbelievable yet autobiographical true story, laying bare his family's trauma with both raucous and heartfelt results. A Magnolia Pictures Release.

When a scientist proves the existence of an afterlife, two deeply tormented strangers reluctantly agree to travel together cross-country to join the study and voluntarily end their lives. Established genre film producer Mali Elfman makes her feature directorial debut with this both humorous and affectionately sincere supernatural road trip.

What was supposed to be a quick, easy drug run quickly turns into body horror hell when two best friends are forced to smuggle the drugs by ingesting them. A dirty and disturbing queer nightmare from Carter Smith (director of THE RUINS), featuring a take-no-bullshit Jena Malone (DONNIE DARKO, THE NEON DEMON) and a delightfully unhinged supporting turn from Mark Patton (SCREAM, QUEEN! MY NIGHTMARE ON ELM STREET).

In a 1950s Manhattan, newlywed couple Suse and Arthur are witnesses to a gruesome murder and become the obsessive target of the gang responsible for the crime. Filled with the signature theatricality of Amanda Kramer’s filmography, this vibrant musical explores themes of sexual identity and emotional fragility with a wild neon aesthetic and beautifully choreographed performances.

After a long run with the PHANTASM franchise, writer/producer/director Don Coscarelli gave the genre film world yet another long-favored midnight movie gem in the form of 2002’s BUBBA HO-TEP. Starring Bruce Campbell in his other role-of-a-lifetime as Elvis Presley and the brilliant Ossie Davis (DO THE RIGHT THING) as John F. Kennedy, this cult classic imagines the two legendary figures as senior home residents waging war against an evil soul-sucking mummy. Courtesy of The Silver Sphere Corporation and American Genre Film Archive.

Clay Thompson writes, directs and stars in this grungy, supernatural buddy comedy. Struggling artists and childhood friends Clay and Whit reconnect after a chance encounter and make a spooky discovery, which binds them together and puts old friendships to the test. A Utopia Release.

INCREDIBLE BUT TRUE - US Premiere

Alain and Marie are a couple that move into the suburbs for a quiet and serene life. As they visit the apartment, they are told about a trap door in the basement that has the power to forever change their lives. Soon, the relationship between the two will be put to the test by this mysterious tunnel. An Arrow Films Release.

Raquel is a young teenager who has recently moved back to her hometown to start a new life with her father. She is immediately taken by visions of an important message relating to the Bible and embarks on a controversial mission that will lead to a spiral of religious fanaticism and insanity.

Shery & Lilas are lead guitarists in Slave to Sirens, the Middle East’s first all-female thrash metal band, based in Beirut. Rita Baghdadi offers a lyrical and heartening portrait of the musicians as band dynamics are tested and personal discoveries are made in the face of societal pressures and political upheaval. An Oscilloscope Laboratories Release.

Experience another dimension of fantasy, horror, and sci-fi that only our region could breed. No, this isn’t The Twilight Zone, but it may as well be. Next stop—The Pacific Northwest.

Pushing boundaries and opening minds, Cinema Vista isn’t for the faint of heart. Find your new favorite short in this collection of intense and unforgettable genre-bending films.

Join NBFF for our very first screenplay reading with Jenah Silver’s THE OLYMPIANS, a horror-thriller currently in development. As we expand our festival programming into different facets of filmmaking and storytelling, let’s go to where it all begins: the written word. We’ve teamed up with Valley Center Stage and their regular staged reading series to bring you this soon-to-be major motion picture, an exhilarating and terrifying roller coaster of a story from an impressive new voice who writes female characters with strength and depth amidst high-octane thrills.

THE OLYMPIANS blends action, sports, and horror in a gruesome tale of survival as we follow a group of five female athletes running from the monster stalking their remote training camp. But the closer they get to escaping, the higher the stakes become as individual dynamics and old rivalries threaten their chances of survival. They say every Olympian dies twice: once when they retire, and once when they actually die. Hopefully retirement happens first…

Witness an in-depth conversation with producer, writer, director, immersive creator and 2022 Dulac Vanguard Filmmaker Award recipient Mali Elfman. The multi-hyphenate talent will discuss her debut feature NEXT EXIT as well as the many ways she’s left her imprint all over the genre film space producing films such as Mike Flanagan’s BEFORE I WAKE and the horror anthology SCARE PACKAGE, co-founding horror short film distributor Fun Size Horror and creating multiple live experiences as a member of the immersive company All of Them, Witches!

This year’s theme: “Float”. A great monster once told me “we all float down here”. These days, this expression seems more relevant than ever as we see time and geography broken, with the things that once kept us tethered to our home now seemingly drifting away. Join storytellers as they share moments in time where gravity felt like just another lie.

This event will be hosted by Seattle-based storyteller, comedian, and weirdo Emmett Montgomery — NBC’s Last Comic Standing, Seattle Weekly’s Best Comedian 2015, 2017, 2018, and host and curator of the community based “comedy” show Joketellers Union (with Brett Hamil) and the experimental basement/storytelling show The Magic Hat.

Join Hidden Northwest Tours for an introduction to paranormal investigation, ghost hunting and more. From location discovery, historical research to folkloric influences, learn what it takes to collect and archive the unexplained. Local sites will be discussed in detail as well as tools and special materials used. See ya there!

More information on the 2022 North Bend Film Festival can be found at www.northbendfilmfest.com