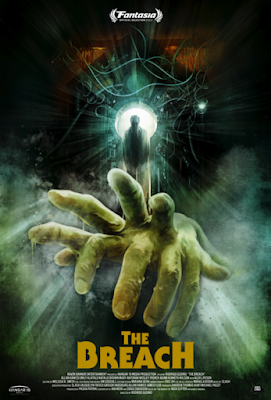 When a body is found floating down a river in a canoe, the sheriff, a deputy and an expert tracker, travel into the wilderness in order to find out what the scientist they believe to be the dead man was up to. However once they get to his home they find that things are seriously wrong.

This is a good looking horror film with a nice visual style that despite having some kick ass sequences is done in by deadly pacing and jump scares that don't make sense.

The main problem with the film is that after a compelling opening fifteen minutes this film slows down to a crawl. Outside of the arrival of the wife of the missing scientist  not a whole hell of a lot happens until the half way point. Yes, we get the love triangle between the sheriff, deputy and tracker, but we didn't come into a horror film for a romance that is ultimately window dressing. While we get the triangle the breach of the title is largely ignored.  The filmmakers seem to have remembered  that when you are making a movie from a well worn template (mad scientist's creation goes astray and opens a door) you have to keep things moving. Unless you are showing us lots of really cool things you have to keep moving.

Things begin to move into action with a halfhearted jump scare that visually makes no sense. The problem from there  is  that the pacing remains slack (including the action scenes which have no urgency) and while things happen not a hell of a lot of them make sense, something we notice because the pacing never picks up. I replayed some sequences on my screener in order to make sure I was seeing things correctly.

What kills me is that had the pacing been better, and had the logic been a little tighter this would have been a killer film. There is a disturbing nature to the story and the creatures, when we see them are f-ing disturbing.

While not bad, the film is just okay.  Its a film you're going to talk about the monsters and nothing else.