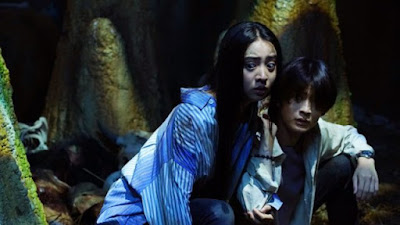 A couple months back when the Fantaspoa film fest was happening Liz Whittemore  caught Ox Head Village and was raving about it. She wouldn’t say much  but she simply told me that the opening of the film would have me talking to the screen and then it would get worse. Intrigued I considered trying to catch it at the festival but realized that I couldn’t fit it into my schedule. I then hoped I could catch it down the road.

With the film playing at the New York Asian Film Festival I go  my chance and I started to talk to the film at the opening and I kept talking for the rest of the film.

The film is the story of three high school friends who disappear investigating a haunted hotel. When footage of what happened to the girls surfaces, one of their friends sees a figure that looks like her in it.  Curious she goes to investigate.

Taking well worn tropes and turning them in unexpected and often creepy ways. The opening for example had me certain I knew how it was going to go and then it  did and then it didn’t  and it made me sit up and take notice.  From that point I was willing to go anywhere the film was going because I wanted to see how director ---used our expectations against us. I was chilled.

This is a super film that really surprised me in so many great ways. While I know some people have been disappointed that it doesn’t take things far enough, I was entertained. I liked that --- didn’t feel the need to change everything up, but kept it feeling real. It made the film more compelling and perhaps a bit more festering in that we could see the rot behind the scenes which made it scarier.