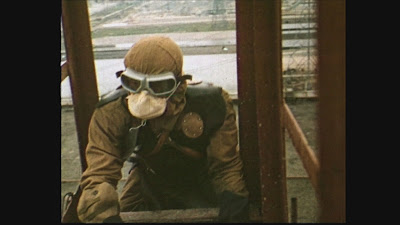 The film begins with images of Swan Lake being performed  while a survivor of Chernobyl relates how you could tell when something had gone wrong by what was shown on Soviet TV. If Swan Lake was shown on every station you knew something had gone seriously wrong. The directors of Chernobyl The Lost Tapes   then reveal footage that showed just how badly things had gone when the nuclear power plant exploded.

Made up of footage shot to document what was happening and to potentially be used as part of a documentary showcasing the glorious victory over tragedy. The glorious never happened and the videos were hidden away because no one wanted to either be reminded or to let anyone see how badly things got. The mix of survivors words and the lost footage results in a heartbreaking film. Its clear from watching the film that everyone was wildly in over their head and that no one really knew how bad it was. Looking back we can see the gates of hell had opened but the people on screen didn’t and it is incredibly sad. While we know the people speaking to us survived, we also know that most of the people in the videos are long gone, having died a short time after their images were plucked out of time.

I was moved by this film. I have been interested in what happened ever since word leaked out. Seeing this film made so much real, more so than even the stunning HBO series since there is no pretense only the stark images and words.

I highly recommended the film but make sure you go out in the sunshine when its done so you see life goes on.