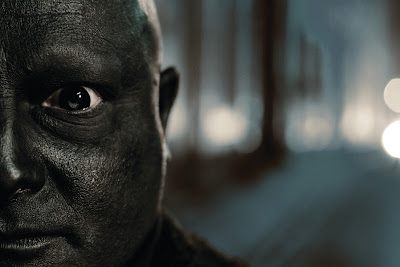 Using the story of the Butcher on Mons (five people were killed and dismembered and left in clear plastic bags where they could be found before the killer disappeared) as a starting point MEGALOMANIAC ponders what if the the killer sired people who picked up his mantle.

Form over content film is a visually disturbing film that throws everything into the images. This is a film that has images that you will want to hang on your wall, when they are not turning your stomach.  In all seriousness this film has images that will haunt your nightmare and your conversations about the best things that films are doing visually in todays cinema.

While I know some will defend this film, the truth of the matter is this is a film that hates women. Yea I know one of the killers is a woman, but let's face it this is a film that truly seems to hate women and wants to see them cut up and destroyed. If you need proof don't just took at how the women are treated- look instead at how the brutalization of the women is shot as opposed to how the killings of the men are shot. The rapes and murders of the women are on screen and in your face. A woman's genitals are bitten off mid-rape and spit out. We watch the women suffer with the camera right in their faces. They are always turned to the camera. Not so much with the men who are allowed to look away or killed with part of the violent act off screen. We don't see the men. Additionally look at how the men all have names as if they are people  and we shouldn't see people killed, while most of the women do not, they are nobodies and nothings simply existing to be savaged. I'm sure the director had his reasons for how he shot the film but the way it came out is hurtful, vile and exactly the sort of thing that is going, or at least used to, create a fire storm.

The trouble is that the ugliness the film creates really has no reason to exist. As I said I know people will defend the film, but to what end? More ugliness in the world? You can't full say it's a reflection of the world  because how many serial killers do you know? Additionally while some could say its a reflection of the far right's attitude toward women, the reality is while they want to control women they aren't out to kill them horribly, yet.

This is a just a pretty little hate machine and despite some impressive images can't not be recommended.