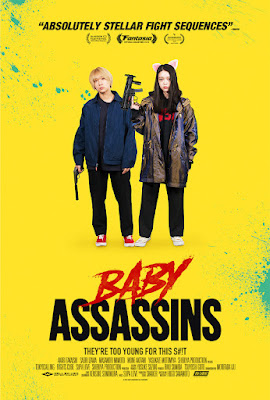 Two high school girls are about to graduate, however they are in capable of doing anything other than being assassins. The trouble is they are getting close to graduation and their bosses tell them they have to get a regular job and learn to blend in. Worse they are insisting that the pair move in together. As they struggle to learn to be normal they end up running  afoul of a yakuza family.
Wickedly funny  feminist action buddy comedy turns all of the typical conventions of these sort of films. Yea we've been here before but at the same time this takes the expected tropes and turns them on their head in ways that make you laugh out loud as you wonder why no one thought of that before.
That the film works as well as it does it is due entirely to the two leads Akari Takaishi and Ayaori Izawa, who create perfectly charming sociopaths we want to hang out with. Psychos should not be this much fun. They are so good together that I want to see either a sequel or a reteaming.
If there is any real problem with the film it is that the middle section of the film goes a bit too far into the buddy comedy. The action drops away and while it remains funny, the pace slows. Fortunately things pick up and the film drives to the end with some kick ass action sequences.
Ultimately this is a great time and is highly recommended.
See this film.
After the Fantasia screening the film streams exclusively on Hi-YAH! July 22 before hitting digital, Blu-ray™ & DVD August 16
Posted by Steve Kopian at July 16, 2022