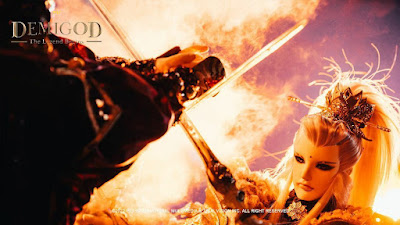 The creators of LEGEND OF THE SACRED STONE return with another puppet wuxia epic that you have to see to believe.

The film begins with Win Lin unintentionally taking sides in a battle between two mythical monsters. This sets in motion events that may spell the doom of everyone.

Don’t let the fact this film is all puppets turn you off this is kick ass film making and towering story telling. The puppets give us a sense of reality while at the same time opening up our minds to the sense that anything can happen. Playing exactly like a martial arts epic of the 1970’s the film amps it up by having creatures that fit the world. There is no noticeable CGI so we believe anything is possible, and fear for the characters because they can get hurt (blood flows).  This is movie magic of the highest order.

I can’t recommend this film enough. It’s a great action epic and one hell of a story.

This is what going to the movies is all about.